Paradise Lost in America and Germany

So this is basically a post where I get to pretend that I'm on Front Row (on radio 4 yes?), and talk about   the things I've been thinking about and reading and watching and stuff. Also, I just wrote a new song which is all about this stuff, which is why it's sort of Eyes & No Eyes related.
I recently read an incredible novel by Philip Roth called 'American Pastoral', set in New Jersey during the Vietnam war, and watched a film called 'The Baader Meinhof Complex', which is based on real events and tells the story of the Red Army Brigade, a faction of left wing terrorists active in Germany, primarily during the seventies.
http://en.wikipedia.org/wiki/American_Pastoral
http://www.baadermeinhofmovie.com/ 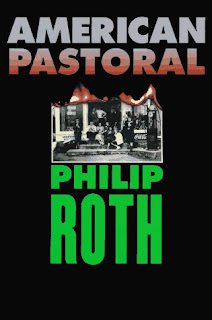 The two things feel connected and are both pretty good, (the novel is really really good actually). Both deal with young people during the late sixties and early seventies who were strongly opposed to the war in Vietnam, and connected it to a broader view about American imperialism and the capitalist society of America and Western Europe. And both sets of young people decide that it's justifiable and necessary to reply to the injustices of the state and 'the military industrial complex', as people sometimes used to put it, by using violence.
I don't want to give too much of the plot of the novel away, but it comes at it from the view of the father of someone who resorts to violence, to terrorism basically, and it's pretty heart-wrenching, seeing his agonised bemusement as to why this has happened. He represents the 'establishment' side of things, but the telling thing for me is that he is the one in the novel with whom I have the most sympathy, not the 'revolutionary' youth. Similarly, in the Baader-Meinhof film the terrorist gang are protagonists and sort of anti-heroes, so you kind of feel sympathy for them, but the stuff that they did is straight up wrong as far as I'm concerned, and fairly horrendous at times. 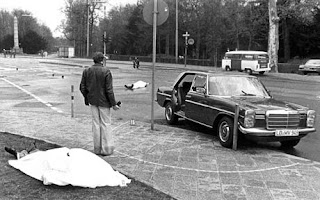 The thing I take from the film and the novel is that any view of the world that divides people into two camps, some of whom are morally virtuous (revolutionaries, the proletariat, etc) and some of whom deserve whatever they get (capitalist oppressors etc etc) is just too simple and is useless, and also dangerous. Stuff is always complicated.
Also, violence is not cool. It doesn't solve anything. Music solves, if not everything, then some things at least, for sure. I actually ended up watching 'The Baader-Meinhof Connection' because of my general interest in German music at the moment, which come to think about it, is what I should be telling you all about, and is probably way more interesting. Oh well. Soon.
Posted by Tristram 1 comment:
Email ThisBlogThis!Share to TwitterShare to FacebookShare to Pinterest

It was a pleasure to play this last Friday, in Brighton. The line-up was a great one to be on: us, Soccer 96, S.O.N.A.A. and Damo Suzuki, who was accompanied by a band consisting of our very own Tom and Marcus, on drums and guitar respectively, Patrick and Alistair from Sons, on bass and synth/trumpet, and Danalogue and Beatamax from Soccer 96, on synths and drums. Everyone sounded great, the headline set in particular was incredible.
Also, Innerstrings Psychedelic Lightshow made the whole room look awesome.
Here are some photos:
http://brightonmusicblog.co.uk/2013/03/03/willkommens-echo-featuring-damo-suzuki/
http://www.flickr.com/photos/southcoasting/sets/72157632896231722/with/8521036818/

This is us playing Hidden Thieves and Breathe In:

And this is the start of Damo Suzuki's set: