This is an interview we (actually just me) did for a French blog called 97 Rue du Rock. .
Why does everything sound better in French:
http://www.97ruedurock.com/laissez-vous-seduire-par-la-folk-de-tristam-658/
We've also been having fun putting it through internet translators, which has yielded gems such as:
'There are some groups with which we already played and which one feels near musicalement speaking: Mariner' S Children, Peggy Sweat, Sons off Christmas and Adrian, Laish, Lulu and the Lampshades.'
and also:
'Until now, I write the words and I pose base melody. Then, one spends the hours to test above, with bidouiller the structure and everyone takes part in the writing. One would like to compose like that, while jammant together. It is not yet really the case, but it is it towards what one tends.'
Also, Lulu and the Lampshades launch on Wednesday at the Lexington is sold out! Good news! Hope to see you there. .
Posted by Sarah Heather No comments:
Email ThisBlogThis!Share to TwitterShare to FacebookShare to Pinterest

This is us, on a fire escape in Manchester, playing 'Song for Laurie', wrapped up in a load of layers. It was filmed for Manchester Scenewipe blog, whilst we were on tour with Mariner's Children in October (or was it November by that point?). The fire escape belonged to a pub called the Dulcimer, which I'd thoroughly recommend.


Tristram from MCR Scenewipe on Vimeo.
On a related note, our friends The Mariner's Children are playing at an event at Cecil Sharp House tomorow (saturday 22nd) night, which is called 'Shhh', and is billed as a festival for quiet music. They aren't actually particularly quiet, but I think the venue really suits them: it was founded in memory of Cecil Sharp who was a pioneering collector of old British and American folk songs, which he preserved by traipsing around the countryside talking to people in pubs and the like and notating all the old songs they remembered.
Also playing is Stuart Braithwaite, of Mogwai fame, and Tasseomancy, who used to be called Ghost Bees. I haven't heard this newer incarnation, but Ghost Bees songs are great ('Sinai' is really good), and lots of other people are playing as well. This is the link to the Local's site, (the promoters), with the details:
http://www.localism.org.uk/main/shows?m=show&id=149
Posted by Sarah Heather No comments:
Email ThisBlogThis!Share to TwitterShare to FacebookShare to Pinterest

So Im going to announce two tours at once, double excitement. .
The first is the Lulu and the Lampshades tour that we're going on as support, including the launch for their new Ep, which is released officially on Valentines day (aaahhh). The launch is a bit earlier, on the 2nd Feb, at the Lexington in Angel. After that the dates look like this:


February 4th – 60 Million Postcards, Bournemouth
February 6th – The Louisiana, Bristol
February 7th – The Hope, Brighton
February 8th – Night & Day, Manchester
February 9th – Bodega, Nottingham
February 10th – The Railway, Winchester
If you dont know Lulu and the Lampshades, they're amazing, this is them in a shop window:
Right, tour number two is a co-headline tour with our friends Laish, who are part of the Willkommen Collective based in Brighton. These are the dates, venues, places, etc:
22nd Feb - Oporto. Leeds
23rd Feb - Canteen. Bristol
24th Feb - Undertone. Cardiff
25th Feb - Slak. Cheltenham
26th Feb - Utrophia. London
Laish are also ace, this was their London launch for their album at Notting Hill Arts Club:
﻿They just released the album on Willkommen's record label, it's very good, I speak from experience because I own it. If you live anywhere we're coming to visit, come to a show, it would be nice to see some friendly faces on our way round the country. .
Posted by Sarah Heather No comments:
Email ThisBlogThis!Share to TwitterShare to FacebookShare to Pinterest

God is in the TV

God is in the Tv gave us a nice review:
http://www.godisinthetvzine.co.uk/content/content_detail.php?id=4890&type=Albums
Posted by Sarah Heather No comments:
Email ThisBlogThis!Share to TwitterShare to FacebookShare to Pinterest

So Greg Griffin, our bassist, ukulele and harmonium player, singer of epic backing vocals and squeezer of harmoniums, has decided that much as he loves the band, he needs time to work on solo projects that he's planning, and so won't be playing with us anymore. Which is sad.
On a positive note, our friend Marcus Hamblett, of Mariner's Children, Sons of Noel and Adrian and Alessi's Ark, is standing in on bass, where and when he's free, (given that he plays in a lot a lot of bands). The four of us supported Joe Gideon and the Shark at the God Dont Like It Christmas party at the Lexington (both Joe Gideon and the Shark are ridiculously good), which was pretty fun.
This what it looked like: 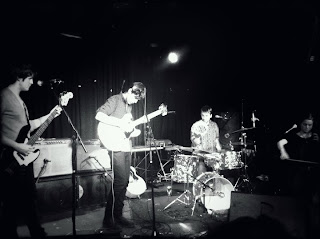 Posted by Sarah Heather No comments:
Email ThisBlogThis!Share to TwitterShare to FacebookShare to Pinterest

Folk that doesnt send you to sleep . .

that's what we were going for. .
http://trustmeonthis.wordpress.com/2010/12/11/double-review-accidents-artifice-and-someone-told-me-a-poem-by-tristram/
Posted by Sarah Heather No comments:
Email ThisBlogThis!Share to TwitterShare to FacebookShare to Pinterest
Newer Posts Older Posts Home
Subscribe to: Posts (Atom)