Album Is Out, Shows Are Happening, Look, Here's a Video . .

You can get a copy of our debut album here: http://eyesandnoeyes.bandcamp.com/

Tak/Danke/Thanks to everyone who came to the launch, and everyone on the Peggy Sue Tour who clapped, cheered, watched appreciatively, let us stay with them, or otherwise saw us on our way round Denmark, Germany and the Uk. We had a ball!

We also released a video for Autocrat:

It features a lot of my face, and a little bit of Tom pretending to be me/a figment of my imagination. And some plants on a turntable.

Shows coming up in Brighton, Oxford and London, starting at The Great Escape (http://greatescapefestival.com/) next Thursday.


HABIT IS STRONGER THAN REASON

HERE I AM, SO GLAD YOU ARE

ALBUM ON THE WAY AND NEW SONG FOR YOUR EARS!

Our self-titled debut album will be released on the 31st March 2014 via Willkommen Records. Yesterday it was Clash Magazine's track of the day, as you can see here:
http://www.clashmusic.com/news/track-of-the-day-81-eyes-and-no-eyes
Clash are also streaming 'Hidden Thieves', which is track 3, Side A by the way.

The album is available to pre-order from our bandcamp page, as a cd, record or digital download, look, here: https://eyesandnoeyes.bandcamp.com/
The vinyl is limited to 300 copies, and is 180g heavyweight. 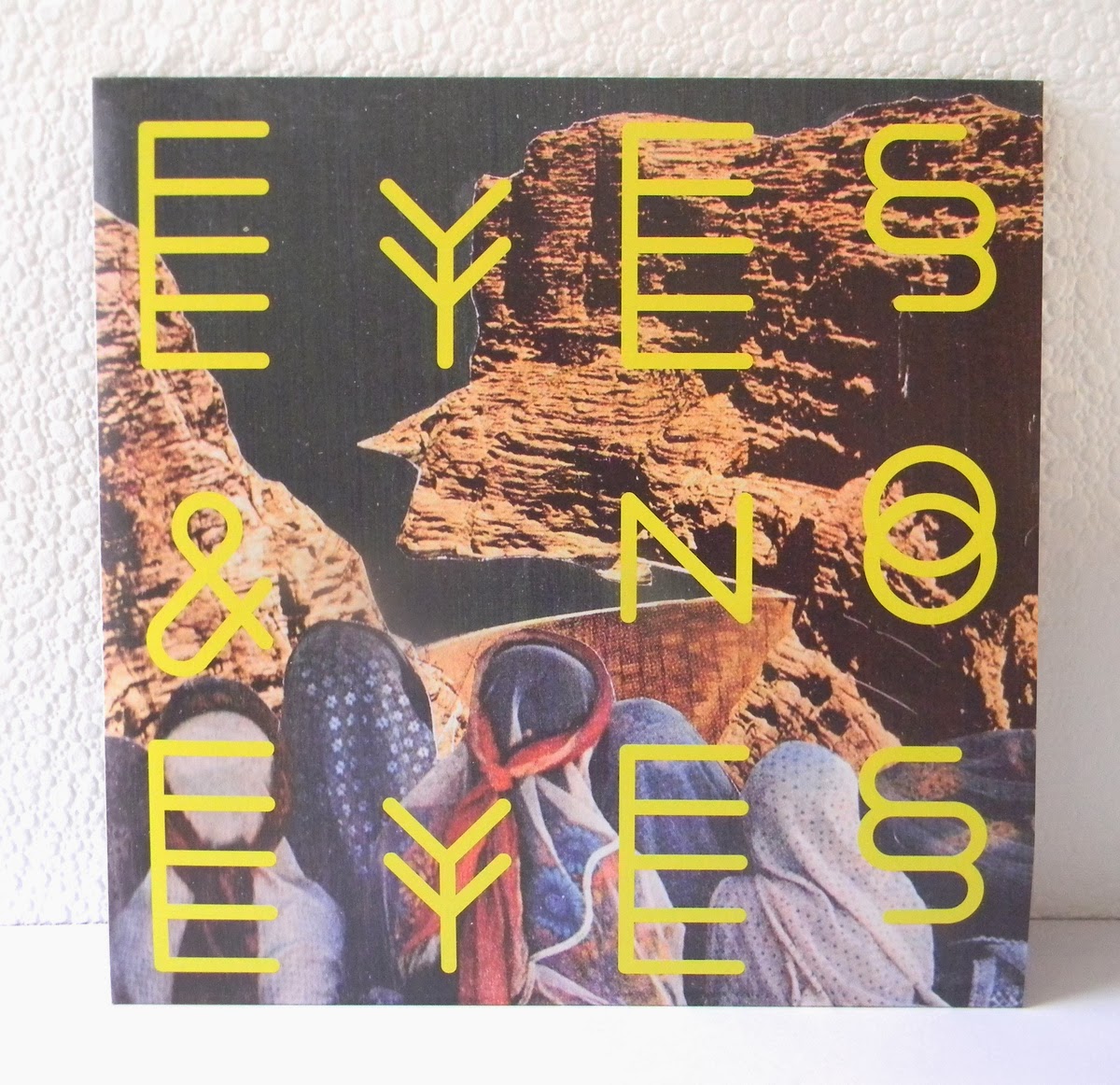 We're all pretty stoked about releasing this thing into the world. It's been a long time since we started it off, and it feels like we've played a lot of gigs around the place without any kind of recorded representation of what our live set sounds like, so it's awesome to finally have that. The finished product features artwork by our good friend Joe Goouch, which you can see above and below. All of Joe's stuff is great, it's a pleasure to be able to use his work to accompany our music. 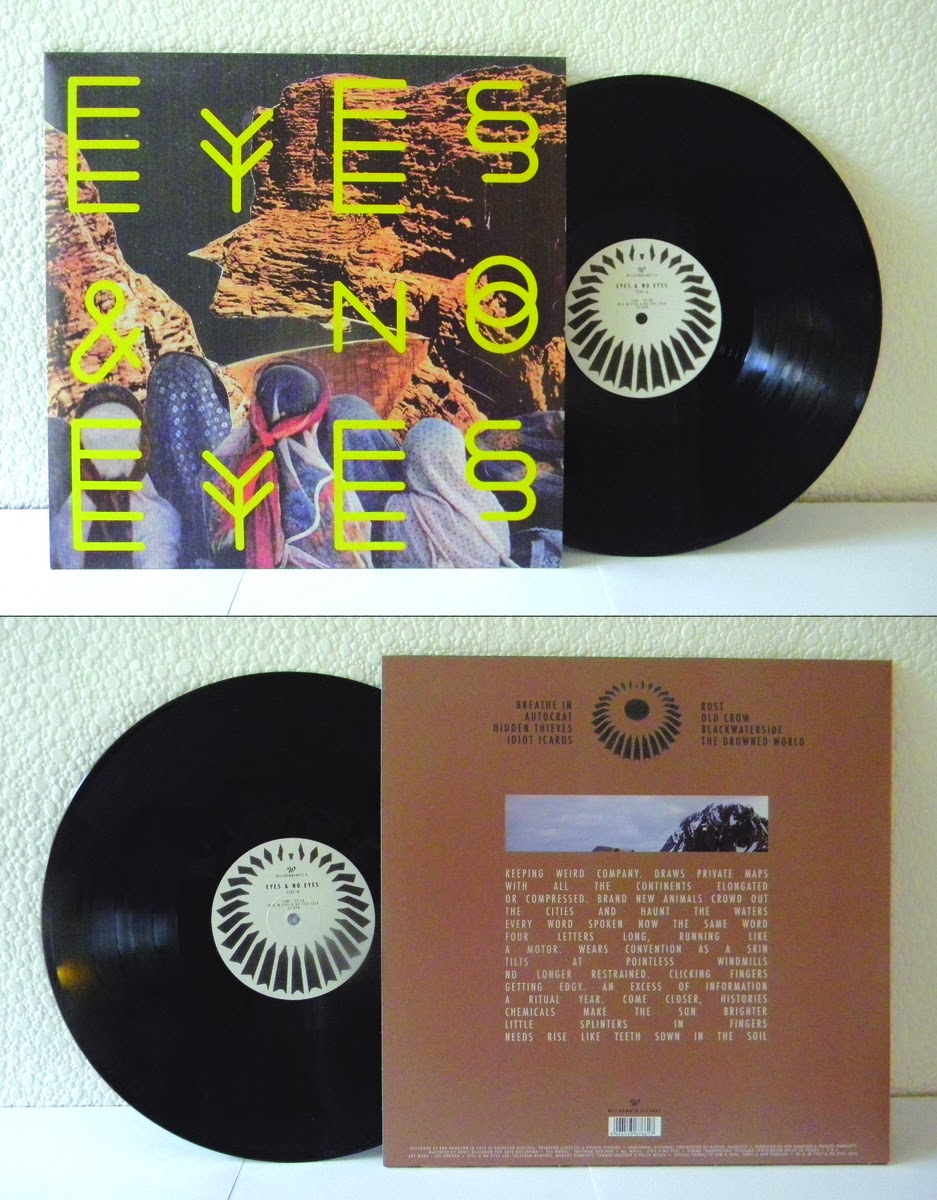 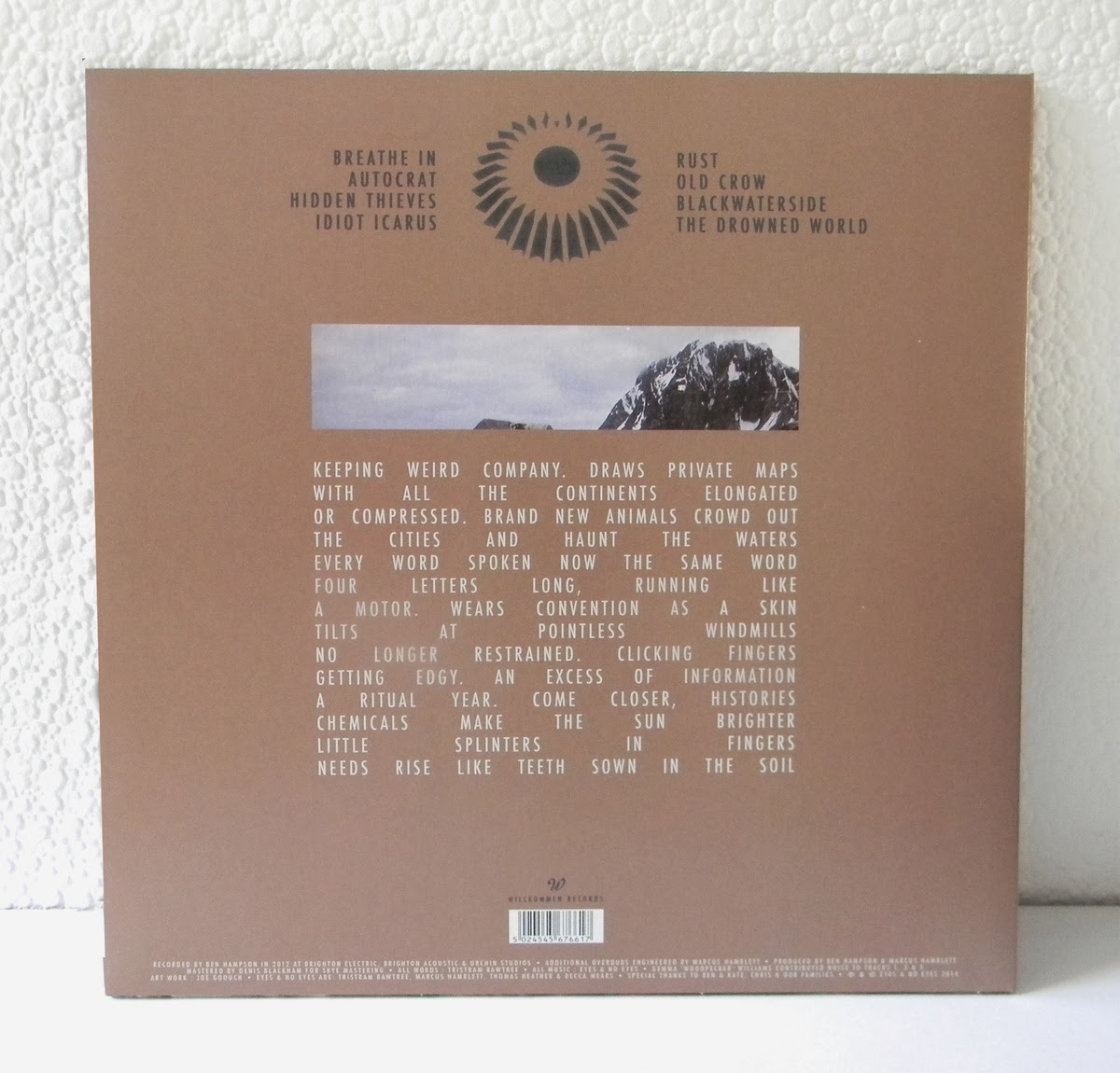 We're pretty stoked to be going on tour with our friends Peggy Sue next March and April, in Europe and the UK. You can check out the dates in the Live section, here:

They're an awesome band, and will have recently released their third album, 'Choir of Echoes'.
This is the video for their single 'Idle'


If you can make it along to one of the dates, it would be great to have some people down early to play to.
Posted by Tristram No comments:
Email ThisBlogThis!Share to TwitterShare to FacebookShare to Pinterest

Music Made by Dickheads

So, some time ago I discovered, through the long arms of the internet, the basic back story of the Norwegian Black Metal scene, as it originated in the 90s. I got into listening to a number of the more famous bands from the 1st wave of Black Metal, and a couple that were more recent. This also led me to discover some of their more progressive offspring in US Black Metal, such as Liturgy and Wolves in the Throne Room. I don't know anything more about it than most, and metal of any sort is not the principle genre of music I listen to, although I've always had a soft spot for it.

All that explains a little bit why I was interested when, fairly recently, Varg Vikernes, the man behind Burzum, was arrested in France, said to be under suspicion of 'plotting a massacre'. I was already aware that the man was an unpleasant human being, given that the one thing everyone knows who's heard about him is that he was responsible for the murder of his band mate Oystein Aarseth (aka Euronymous) whilst the two were playing in Mayhem. Doing a quick bit of reading, I learnt that he owned several rifles with ammunition, and had been sent a copy of a manifesto by Anders Brevik, who is responsible for the horrendous attack in Norway, 2011, which claimed a total of 77 lives. A cursory scan of Vikernes' blog reveals that, whilst he publically disowned any involvement or sympathy with Brevik (he wrote that he 'hoped Brevik would kill himself', and that he had 'made a big mistake'), he is also a massive racist and an anti-semite. 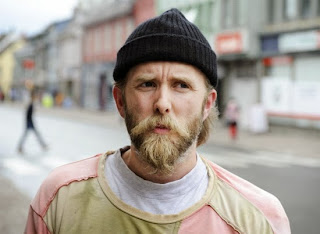 Prior to this, I had only listened sparingly to Burzum's output, although I had liked some of what I heard. The band I have mostly listened to within Norwegian Black Metal are newer, and are called Gorgoroth, meaning 'Terror', (which sounds bad-ass, but actually it means terror in a made-up language from Lord of the Rings, which is possibly less so). Their image and attitude is expressedly 'satanic', and anti-Christian, which incidentally is not something I have a problem with. They have attracted their own share of controversy, for example for a gig in Prague, where they performed behind rows of severed sheep's heads and flanked by naked people standing on crucifixes, with their heads covered. 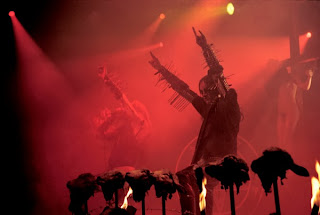 Their frontman Gaahl has been jailed in the past for assaulting someone over a long period of time (some six hours), although he claimed he acted in self-defence. An interesting fact about him is that he's openly gay, which I believe is a rare thing in a scene that apparently contains a lot of homophobia.

Anyway, the whole thing with Vikernes made me think about what degree of dick-headed-ness it's acceptable to tolerate or condone in musicians whose music you listen to. At what point does someone tip over from being personally disagreeable to being someone whose music you will not support or listen to out of principal? Perhaps for some people there isn't actually such a point. I'm interested to see that it's possible to buy Charles Manson albums on Amazon, which to me seems a rather fucked up/morbid thing to do, but it's not my place to interfere with anyone's right to buy or sell them, obviously.

Another example might be the widespread homophobia present in dancehall and ragga, the most famous case of which being Buju Banton's 'Boom Bye Bye', which contains lyrics allegedly supporting the murder of gay men. He did write it when he was 15, so perhaps he's changed his views a bit, but he was also charged in 2004 with being part of a group of 13 men who beat 6 allegedly homosexual men, one of whom lost an eye, so perhaps not, (he wasn't convicted). 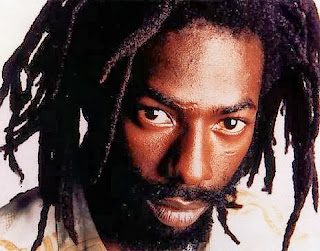 Surfer Blood frontman John Paul Pitts was arrested for domestic battery in March last year, accused of beating up his girlfriend, which she alleged had happened before. I wasn't a Surfer Blood super-fan prior to this, but I definitely liked their music, and the incident has definitely affected how I listen to it now. I don't know for sure what I think about it.

However, there's a lot of music that deals with murder or generally horrendous behaviour in a more general sense, that I obviously wouldn't censor or refrain from listening to. Swans famously have a song called 'Raping a Slave', and Swans are great. It seems like there's a blurry line somewhere that needs to be drawn.


I would say that the obvious measure to use is the apparent intentions and character of the musician and how you feel about them. Take those things and react accordingly. There are bands and record labels that I'm always going to want to support, because I respect their stance and attitudes to things so much, like Discord or Constellation bands, and there are people that I'm friends with who make music, whose music I'm always going to have time for because I know they're such awesome people.

Some people whose music I love have probably behaved like dickheads in their personal lives, (eg. Dylan), in terms of relationships and stuff, but I think I'm fine with that. I would start to draw that line when I discover people believe in fascist madness obviously, but also when I learn of or see people being dickheads towards others.

But what about all that great music made in extremities of emotion by unpleasant people? Is it puritanical to suddenly stop listening to it, if you might have enjoyed it to start with? Perhaps a compromise would be to listen to it, but not support the artist by buying their albums or attending their shows, but I reckon that's just an unnecessary amount of double-think.

In the final analysis, what we listen to reflects how we feel about the world and the people in it, and to listen to someone's music and enjoy it you have to get inside their state of mind in some way, and I guess with the music of Burzum, for one, that's not something I'm prepared to do.
Posted by Tristram 1 comment:
Email ThisBlogThis!Share to TwitterShare to FacebookShare to Pinterest

We had an awesome time playing End of the Road, as well as hanging out and catching a load of amazing bands. Personal highlights for me were Angel Olsen, David Byrne and St Vincent, Braids, Savages and Bo Ningen, and of course our friends Landshapes, Laish, Rachael Dadd and Ichi.

If you caught our set and wanted to buy a single but we'd already sold out, fear not, you can get one here: http://eyesandnoeyes.bandcamp.com/merch

We'll have some more shows lined up soon, meanwhile we're organising the release of our debut album, which should be out at the end of this year or the start of the next.

In the mean time here's a fan video of David Byrne and St Vincent, in honour of their set, which was euphoric and awesome:

Summer Is Icumen In

WORD. So, we released our single,thanks loads to everyone who made it down to the launch.
Since then we supported Torres at the Lexington, and Trixie Whitely at the Southbank Centre, in the Purcell Room.
I went to watch David Thomas Broughton play twice, because the man is incredible. He has such a great baritone, and some awesome moves.


This weekend we play Secret Garden Party, on the Forum stage, at 8.30 on Saturday.
(secretgardenparty.com)

Our next gig after that is on the 22nd of August, supporting Ducktails, which is mainly Matt Mondanile from Real Estate. This song is a couple of years old I think, I love it:

That's all for now, go get some summer.